Move over Siri, The Google Assistant is here! That’s right. It doesn’t have a name, just Google Assistant. And no, you cannot give it a name… just yet (something to look forward to in a future update). But in terms of things you cannot do, that’s about it.

Google Assistant is versatile and has a lot of cool features to make your life easier but it can get a bit confusing (and even overwhelming). So to clear any confusion you might have (especially new Android users), here’s our guide on the top 12 things to do with the Google Assistant app in 2020. We’ll also go over the setup and some things users should know (mainly about your privacy).

Contents hide
Introduction
Setting Up The Google Assistant App
Control All Google Apps from Your Google Assistant
Privacy Concerns
13 Things To Do With Your Google Assistant
1. Create A Calendar (Or Integrate One From Your iPhone)
2. Screen Phone Calls (Pixel Only)
3. Turn On Continued Conversation (for Home Devices)
4. Set Up Routines
5. Identify Music
6. Get News While You Get Ready For Work
7. Send a Text
8. Get Assistant Apps (Home devices only)
9. Set alarms (and cancel them)
10. Make and edit your shopping list (and even purchase them)
11. Call Friends and Family
12. Save Notes
13. Teach Google Assistant Your Name
Wrapping up…

Google Assistant came out over 3 years ago and it wasn’t actually made to compete with Siri. For Google, this was part of something bigger. And it’s fair to say, it has grown into something massive.

Google Assistant doesn’t just compete with Apple’s Siri but also with Microsoft’s Cortana and Amazon’s Alexa as well. To compete with Alexa and other smart devices, Google originally launched Google Home, a smart speaker that could connect to other devices in the house and control them (like Alexa does).

Apart from these flagship offerings directly from the company, Google has also allowed third-party manufacturers to create their own smart speakers based on Android and Google Assistant called smart displays. You can find Smart Displays from brands like Lenovo and JBL.

Setting Up The Google Assistant App

The Google Assistant app can control a lot of stuff on your Android smartphone… and beyond (more on that later). But before you can do anything at all, you need to set it up. Thankfully, it’s pretty straightforward.

It would take a minute or two for the process to complete (you need to speak a few phrases, select language, etc). 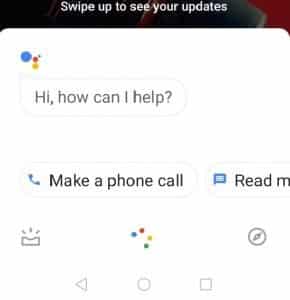 Control All Google Apps from Your Google Assistant

There’s even more but you get the point – Google Assistant has access to a lot of stuff.

Right, so I mentioned that Google stores a ton of data on you and while this article isn’t meant to be about that, it’s important for the readers to know the complete picture. Google Assistant works so flawlessly because it stores a lot of data on you to really get to know you. And most people are fine with that because that’s the cost of convenience.

How much data are we talking about? Well, it depends but it’s usually a lot. Google saves everything from your search history to voice recordings (although it prompts you about this) to your different locations at different times.

The best way to really know how much data Google has on you, go to https://takeout.google.com/.

13 Things To Do With Your Google Assistant

1. Create A Calendar (Or Integrate One From Your iPhone)

You don’t need to “create” a calendar as there already is Google Calendar but you can add events and reminders to the calendar by simply using phrases like “Add a meeting to my calendar.” or “Schedule an event for me on Saturday at 8 PM.” You can also check what’s on your calendar by asking “When’s my first meeting today?” or “What’s my agenda for August 1?”

Now, what if you’re migrating from an iPhone or are using both an iPhone and an Android device? Worry not, you can control both calendars with your Google Assistant. To sync your iPhone’s calendar with your Android device, download the Google Assistant app on your iPhone and enable the shared calendar under Services – Calendar. You can also do this with Smart Display devices, just download the IFTTT app and integrate iCloud with Google Calendar.

Now when you “Hey Google, add an event to my iPhone calendar” – it will.

Annoying robocalls are on the rise but thankfully your Google Assistant can deal with them as well – all on their own. Google Assistant will now screen phone calls for you, if you’re in the United States and Canada, on all Pixel phones, and on some other Android phones.

Robots talking to robots. It’s not flying cars but I’ll take it!

If you have the updated Phone app, you’ll get the option to “screen call” whenever someone calls. If you do that, Google Assistant will ask the caller a few questions and if it’s a robocall, it will be told “Please remove this number from your mailing and contact list. Thanks, and goodbye.”

Otherwise, the call will be put through. You’ll also be seeing a live transcript of the call as it happens.

Continued Conversation feature is what it sounds like – it enables follow-up questions by turning on the microphone for a few seconds after the GA’s response. This allows you to ask your GA follow-up questions without having to press the button again or saying “Hey Google”.

Routines are an extremely powerful feature on the Google Assistant app, which in essence, completes a series of actions with just a single command.

It might seem a bit overwhelming at first to design a routine so you might want to use one of the 6 pre-made routines already available. Go to Google Assistant – Settings – Assistant – Routines.

You can also customize the pre-made routines.

There are plenty of apps on the Google Play store that allow you to use your identity ambient music using the phone’s microphone. Google Assistant has this ability baked in. Awesome.

You can use the following phrases to trigger this action: “What song is this?”, “Identify this song”, “what song is playing?”

6. Get News While You Get Ready For Work

This is one of the favorite features because it’s just so useful. This is great for multitasks who prefer to listen to their news rather than read it. The command can also be customized a lot.

That means you can listen to specific news – “Play the news about Amazon rainforest fires”.

Or listen to news from a specific outlet or podcast – “Play the [podcast].”

You can also pause, resume, rewind, change the playback speed, skip to the next story, etc.

After confirming, the Google Assistant app will send the message.

8. Get Assistant Apps (Home devices only)

While Google Assistant apps are mostly for Home devices, some of them add functionality to your smartphone as well. They’re also known as Google Home apps.

Here are some of my favorite Google Home apps:

9. Set alarms (and cancel them)

Picture this – you’ve had a long day and you’re all snug in bed and tomorrow is a day off and… wait, the alarm! It’s still going to go off at 6:00 am and ruin your sleep. Well, not if you ask your Google Assistant to cancel the morning alarm.

You can also stop timers and ongoing alarms by saying “Stop”.

To set alarms, simply say “Set an alarm for the evening [morning, afternoon or a specific time].”

10. Make and edit your shopping list (and even purchase them)

Another simple but useful command is the shopping list command. If you’re washing the dishes and you see the soap is almost over, just say

If you don’t have a shopping list, Google will create one for you, if you do, it will add this to the existing list. – neat.

Now if you’re in the US, you can go one step further and even order what’s on your shopping list using Google Assistant. You’ll have to set up payment methods beforehand.

After having seen all the other cool stuff the Google Assistant app can do, this might not seem as impressive but it is, again, quite useful.

A simple “Call Ryan” would suffice.

Looks like I used up all the cool things to do right in the beginning – or did I? I think I have one more in the bag.

“Hey, Google, what’s my name?” to know what the current nickname is.

So there we have it. Your complete guide on the Google Assistant app with a bunch of really neat tricks for 2019. The guide will be updated as Google adds new functionality. I also plan on releasing a more in-depth article on the situation surrounding Google’s privacy concerns.