2-in-1s are almost always great – you’ve got less stuff to worry about, they usually cost less and offer more functionality. Well, 2-in-1s are exactly what we are going to be talking about today, answering the question – “What is the best modem router combo for Comcast?”.

Modem Router combo is what it sounds like. The modem part allows you to connect to your ISP (Comcast, in our case) while the in-built router disperses the internet connection to your different devices. That’s the gist of it. Actually of it really. Now, to the question of the hour – best modem router combo for Comcast?

In a hurry? Check out our recommendations below: 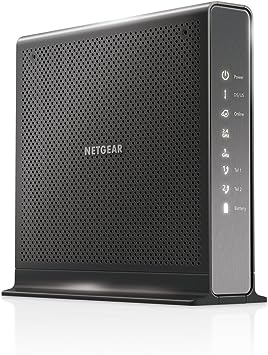 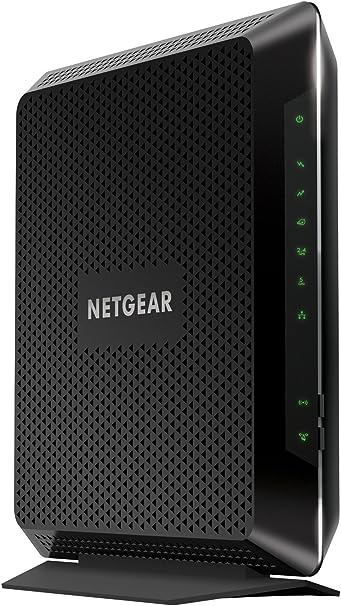 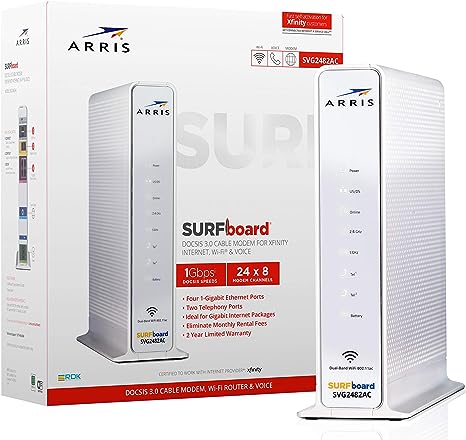 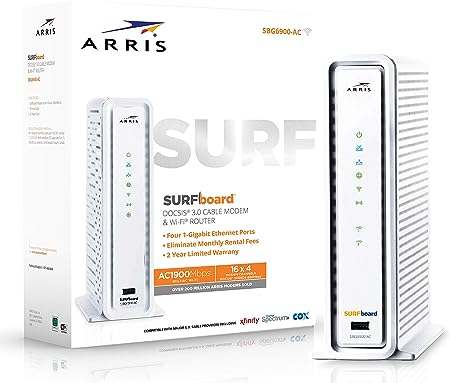 Instead, of just giving you the “best” (best is relative), we wanted to give you some options (and comparisons).

The Most Bang Out of Buck

Motorola modems have been on our list of top Docsis 3.1, in fact, through our testing, we found that the MOTOROLA MB8600 was the best Docsis 3.1 modem for your money. Seems like Motorola has taken another victory home, only this time it’s the in the category of best modem router combo for Comcast Xfinity.

Let’s look at the first thing you’ll notice with this modem: the looks. Honestly, I don’t see how anyone could look at this sleek modem and go “this ugly” because it’s a great looking modem that will sit in a corner quietly and do its job. But looks are subjective. But functionality isn’t and in that department, the MG7550 rocks 7 LED indicators on the front panel so you check the status of your modem/router with just a glance.

On the back, you’ve got four Gigabit Ethernet connections, ethernet outputs, the coaxial connection, a reset button, and a button to turn on/off the WLAN. Most of it is color-coded to make life easier.

But all of this stuff is more or less standard at this price point. What makes the MOTOROLA MG7550 stand out?

The value proposition: At nearly half the cost of some of the other modem router combos for Comcast on this list, The Motorola MG7550 offers some incredible value.

Build quality: Motorola modems and routers are known for their splendid quality, the MG7550 is not an exception.

Chipset: The MG7550 sports the Broadcom BCM33843G chipset which is a better and more reliable alternative to the Puma 6 chipset, seen frequently in router/modem combos.

Easy set up: The 7 LEDs upfront and the color-coded ports make installation quite a breeze.

And here’s where it’s lacking:

Comcast Voice: While the MG7550 is approved to work with Comcast Xfinity, it will not support Comcast Voice

Relative Speeds: The MG7550 is a bit slower than some of the other modems/routers in the list, though, for the price you’re it’s still pretty good.

USB Port: The color-coded rear of the MG7550, unfortunately, does not have a USB port.

If I’ve done the math correctly, the pros of the should outweigh the cons of the MG7550.

Overall, it’s a great little machine and we can whole-heartedly recommend it.

Editor’s note: We wanted to make this list as versatile as possible which meant we couldn’t add some of the more expensive Motorola modem/router combos but if you’re willing to stretch your budget a little, the MOTOROLA MT7711 is a newer and better version of the MG7550.

Check out my detailed review of the MG7550 here for more info.

The perforated brushed aluminum faceplate is sleek and oozes a premium feel… as it should – the C7100V is the most expensive router/combo on the list, but are you paying all of that dough just for looks or does this Netgear machine packs a punch? Spoiler alert – it does.

Lots of features: 24 downstream channels, 8 upstream channels, speeds of up to 960 megabits per second, Comcast Voice, one of the best routers available in any router/modem combo with total output of 1900 Mbps, and a reliable chipset – yes, lots of cool new tech packed into this clean metal box, but there’s more.

Easy installation: Unlike the Motorola which is compatible with the likes of Comcast, Charter Spectrum, Time Warner and Cox, the C7100V is only compatible with Comcast, which means you do not have to call your ISP for activation, instead, you only need to plug this router/modem combo in and log in with your account. So an easy installation but limited to Comcast.

Incredible WiFi Router: Despite touting some great features, the real star is undoubtedly the WiFi router packed inside this combo. The router is comparable to one of the Netgear’s Nighthawk standalone routers which are the company’s flagship line. One feature that you’ll get only in this and the C7000 is the beamforming+ feature that focuses the signal only to your devices, instead of just throwing beams of data in all directions. This increases the range and signal strength of your WiFi connection.

Any Cons? Though a bit pricey, the amazing router combined with the great performance of the C7100V makes it a worthy purchase if you’re in need of all of these features. Thanks to its powerful hardware, we not only see the C7100V as a contender for the best modem router combo for Comcast but for the best standalone routers for Comcast out there.

A Generation Old But Still Worthy

Many of us (including myself) love getting great deals on the last generation’s flagship models, whether it’s smartphones, laptops, or cameras. But how well does the last-gen one of the best flagships stack up against the current-gen

Good Ol’ Features: Many of the features seen in the newer and better C7100V were already present in the C7000. For instance, you’re still getting beamforming+ for better range and signal strength. You’re getting Netgear ReadyShare USB which allows you to backup photos from your phone to your WiFi router and into this USB, you can also store and view video and music files. Another similarity is the 24×8 bonding which means less network congestion (you won’t have to fight with your neighbors for signal).

Mixed Feelings: Despite having some great features, there is one thing that bothers me, the chipset. The PUMA 6 offers high speeds but has been reported for having issues and being unreliable. Although, not everyone has had these issues and you’re unlikely to care about the processor if you’re buying it for basic day-to-day use.

If you’re looking to get all Netgear’s flagship features on a budget, you’re not going to get anything better than this.

Comcast Voice on a Budget

3-in-1 on a Budget: The Arris SVG2482AC is the only other modem router combo for Comcast in this list that supports “Comcast Voice”, which means it not only has a modem and a WiFi router, but also an Xfinity telephony modem. So if Comcast Voice is a must-have for you and you’re on a budget – the work is already cut out for you.

Let’s talk features: Inside there is an AC1750 (802.11ac) Wi-Fi router that allows a theoretical top speed of 1750 Mbps – a bit slower than the Netgear models but fast nonetheless. In the modem department, you get a similar Docsis 3.0 modem with 24 downstream channels and 8 upstream channels so less network congestion.

Puma 6 Again: Since the PUMA 6 was the only popular chipset available at the release of many of these modem/router combos, most them have it (the Broadcom chip came later). So you still might face lower than advertised speeds and reliability issues if you’re gaming. But unless you’re looking at newer modem/router combos, expect to see the PUMA 6 again.

The Arris SVG2482AC is another great budget buy with the same chipset issue has many others in this category. It shares many features with a more expensive modem/router combo and has one extra thing going for it – RDK-B technology. It’s a simple open-source platform that allows ISPs to provide better support, updates, and new services to existing modems/routers.

Here’s a scenario: You’ve been using the modem and router provided by your ISP for years and have just done the math and realized that you’re actually paying more for renting all that equipment. And it’s also quite bad. You’re a simple home user with simple browsing and streaming needs. What do you get? Well, you can get any of the modems listed here but if you were on a really tight budget?

Then you get the ARRIS SURFboard SBG6900AC.

While it may not have all the bells and whistles of the Netgear C7100V or the Motorola MG7550, it packs enough juice to give you a smooth internet experience – and a faster experience as well (relative to your rented equipment).

It’s completely supported by Comcast, offers download speeds up to 686 Mbps, and WiFi speeds up to 1600 Mbps, and you can often find it under a $100!

Should You Buy Your Modem Separately?

Most experts would almost always recommend buying a modem and a router separately. Their reasoning? Separate modems are routers that can get faster firmware updates, have better performance, and more features. But not all of that matters to everyone.

Here’s what you, specifically, should do:

BUY A ROUTER AND MODEM SEPARATELY IF:

BUY A ROUTER/MODEM COMBO TOGETHER IF:

At the end of the day, the only things that matter are what you’re going to use your internet for and how flexible you are.

Fancy Faster Speeds? Take A Look At The Docsis 3.1 Modems Compatible with Comcast Xfinity Instead

Related: Easiest Way to Understand DOCSIS 3.1: Do You Need to Upgrade?

Don’t despair if you absolutely wanted a modem router combo for Comcast Xfinity and also has the blazing fast DOCSIS 3.1 speeds, because we’ve got something that ticks all those boxes as well!

NETGEAR C7800: For nearly double the price of some other router/modem combos, you’re getting more than double the speed – 3.2Ghz! It’s also jam-packed with features like 4-ethernet ports, 2 USB ports, OFDM technology to reduce the network delay, and more!

ARRIS SBG8300: It’s newer, cheaper, and just as fast. It’s also got 4-gigabit ports like the C7800 but you’re missing out on USB ports and also getting speeds a bit slower – 2.3Ghz instead of 3.2Ghz. If you think the money savings are worth it – go for it, it’s a great modem/router with a lot of cool techs.

Related: Check out our detailed review and comparison of all these modems and combos!

Conclusion: Ditch Your Rented Modem and get a Modem Router Combo for Comcast

If you have the money, then, by‌ ‌all‌ ‌means, why not get the most expensive modem router combo for Comcast on this list, it’s got all the right features with little to no downsides. However, if you’re on a budget and only want to save some hard-earned cash by getting rid of that rented modem, then any one of the router/modem combos listed in the list will serve you very well.

The main thing is to ditch that pesky little modem sent to you by our beloved Comcast and get something that’s half-decent – while also saving some cash!